The front desk provides civilians with the resources to submit various forms of reports and requests through the Los Santos Police Department. 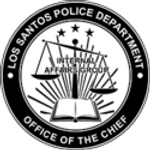 INTRODUCTION
The Internal Affairs Group operates as the investigative arm of High Command to identify and respond to behaviour that may violate departmental procedure, policy or place the image of the department into disrepute. Investigations are thorough and impartial in order to protect the rights of the employee and maintain departmental integrity.

The process detailed below serves as a way for employees, citizens, other government agencies to report misconduct committed by employees of this department. Allegations of false imprisonment, information leaks, leads in regards to corruption, unlawful searches or seizures, poor service, and more, are all grounds for a complaint.


COMPLAINT PROCESS
Employees of the Los Santos Police Department are expected to conduct themselves professionally, adhere to departmental guidelines and act in the best interests of the community at all times. Anyone who feels that an employee has acted improperly should bring the matter to the attention of a supervisor or alternatively file a complaint to the Internal Affairs Group. All allegations will be investigated and appropriate action is taken. It is through this process that you can help maintain the high standards of quality that the department demands and the community deserves.

You may make a complaint in person at any precinct or by filling out the online form found here.